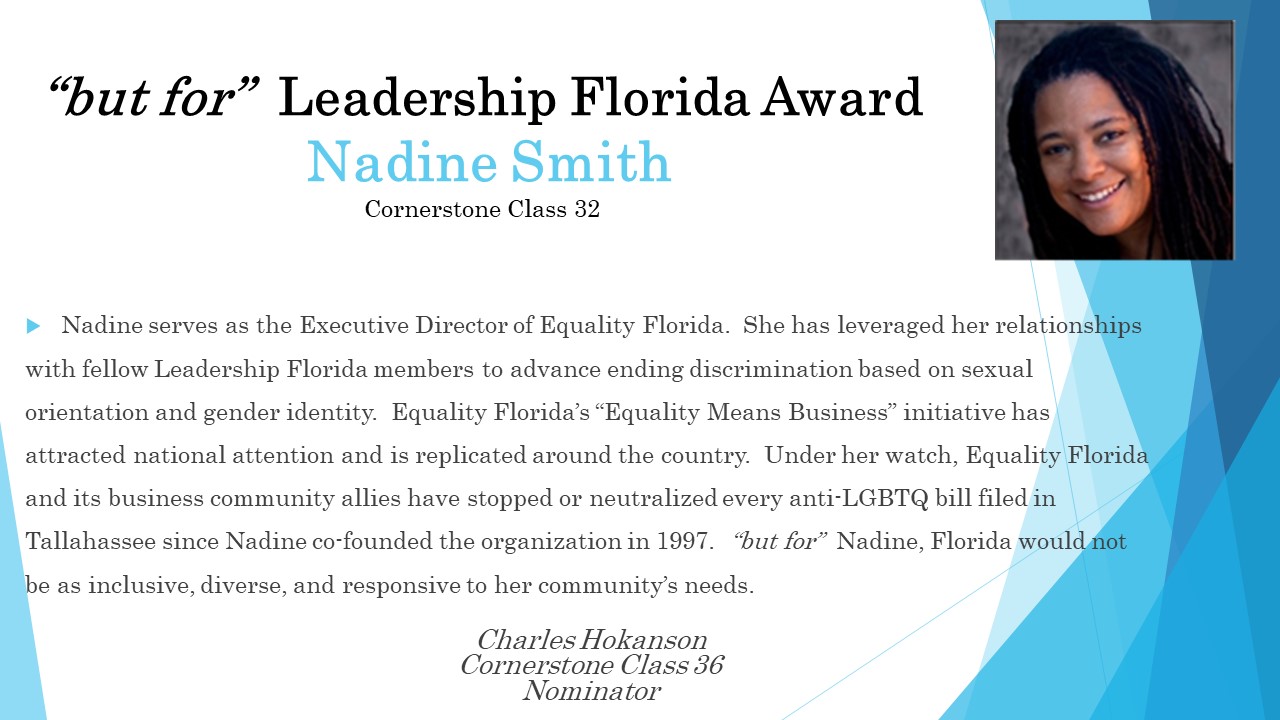 The "but for" Leadership Florida Award was created in 2017 to recognize a Leadership Florida member who has used specific knowledge gained and relationships built through their Leadership Florida experiences to improve the lives of fellow Floridians.  Nadine Smith serves as the Executive Director of Equality Florida, the state's largest organization dedicated to ending discrimination based on sexual orientation and gender identity. An award-winning journalist turned organizer, she was one of four national co-chairs of the 1993 March on Washington and was part of the historic meeting between then-President Clinton and gay community leaders, which was their first Oval Office meeting with a sitting president. She served on the founding board of the International Gay and Lesbian Youth Organization and currently serves as the chair of the U.S. Commission on Human Rights' Florida Advisory Board.

Nadine has strong connections with the Florida business community, with which she has developed hundreds of relationships that have led to the greater promotion of full equality for the LGBTQ community in many sectors, and across all parts of Florida. Through Equality Florida's "Equality Means Business" initiative, as of October 2019, more than 100 of Florida's largest employers and roughly 2,000 small and medium-sized businesses are now a part of a network that has become a national model replicated in states across the country. The visible support of these companies--and their leadership--is adding tremendous momentum to Nadine's and her team's efforts to ban discrimination statewide. Under her watch, Equality Florida and its business community allies have stopped or neutralized every anti-LGBTQ bill filed in Tallahassee since the day Nadine co-founded the organization in 1997.

In response to the tragedy that struck Orlando at the Pulse Nightclub where 48 people were killed and dozens more injured, Nadine led Equality Florida's effort to raise $9.5 million from 120,000-plus individuals around the world--100% of which was distributed directly to survivors and their families. Nadine's extensive and deep business community network and Leadership Florida relationships aided greatly in galvanizing Florida's businesses and community leaders in supporting and publicizing this effort.