Each year, Leadership Florida recognizes one member whose continued leadership activities, outside of their professional responsibilities, have exemplified the highest standards of the organization and whose activities achieved results or set an example of statewide influence. 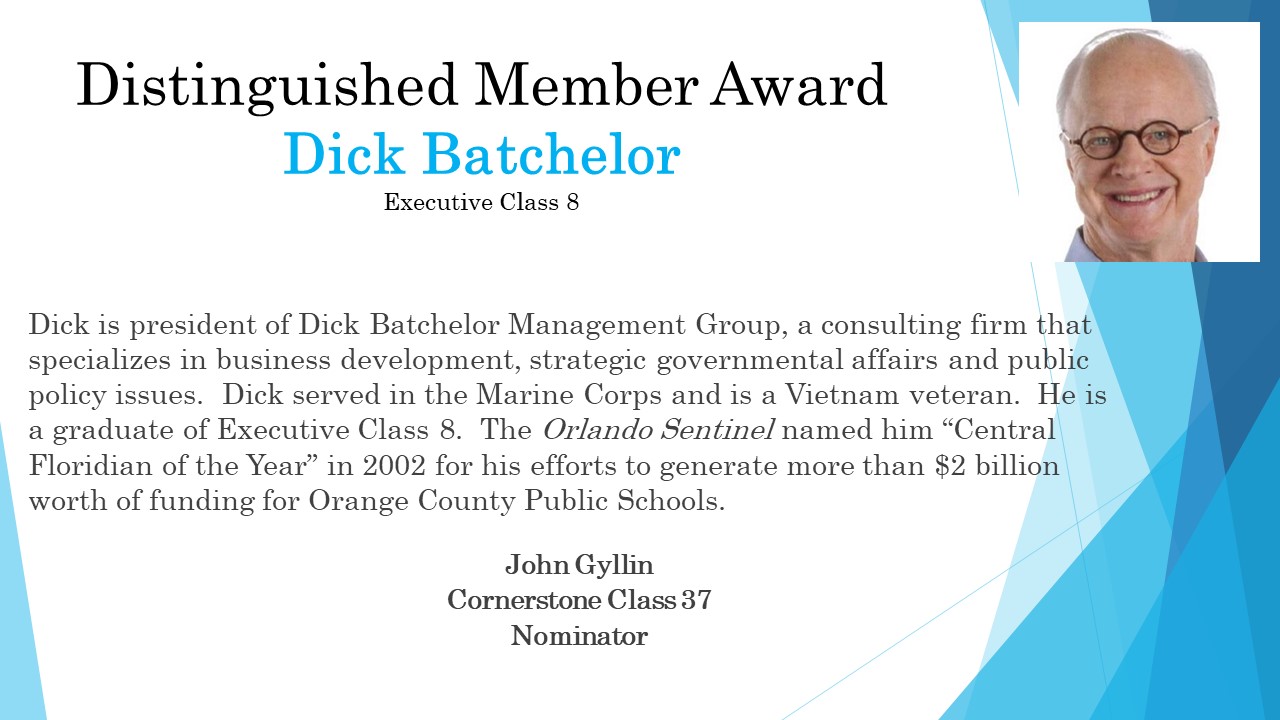 Leadership Florida is proud to announce the winner of the 2O2O Distinguished Member Award is Dick Batchelor, a graduate of Executive Class 8. The Award was announced on June 18th to the hundreds of members attending Leadership Florida’s Annual Business Meeting on a video conference.

Dick Batchelor is president of Dick Batchelor Management Group, a consulting firm that specializes in business development, strategic governmental affairs, and public policy issues. He has been featured numerous times as one of the "50 Most Powerful People in Orlando".

Dick served in the US Marine Corps where he was deployed to Vietnam from 1967-68 and stationed in Da Nang during the Tet Offensive. He credits his military experience with learning to work alongside people of diverse backgrounds, ethnicities, and religions to pursue a common goal effectively.

Batchelor was one of the youngest individuals ever to serve in the Florida House of Representatives. In 1974, at age 26, he won a seat with more than two-thirds of the vote. During his eight years of service, five years were in leadership roles, including the chair of the Auditing Committee, the Health and Rehabilitative Services Committee, and the House Energy Committee, in addition to chair of four subcommittees. Dick received more than fifty awards for his elected service.

In 1994, President Bill Clinton appointed Dick to serve on the United States delegation to observe the South African elections. He traveled alongside the American civil rights activist Reverend Jesse Jackson and met with President-elect Nelson Mandela following the historic election that marked the end of the apartheid era.

In 2000, President Clinton appointed him to the United Nations Commission on Human Rights. He traveled to Geneva, Switzerland, where he spent six weeks examining abuses and drafting resolutions to condemn violations made by certain countries. Three years later, he returned to Geneva as an observer to the 59th annual meeting of the Commission in the wake of mounting global criticism surrounding the United States' 2003 invasion of Iraq.

In 2002, he was named "Central Floridian of the Year" by the Orlando Sentinel for his efforts to generate more than $2 billion worth of funding for Orange County Public Schools. After six prior referendum efforts had failed to generate some level of taxation to support the district's dire construction challenges, Dick organized the Change 4 Kids campaign.

In addition to his annual 5K Run for the Children, Batchelor is an advocate for several children's causes, locally and nationally. He is chair of the Florida Hospital for Children Board, chair to the Children's Leadership Alliance, an advisory board to the Federation of Families of Central Florida, board member of Florida's Children First, and actively involved with the Boys & Girls Clubs of Central Florida.

Dick also serves as vice-chair to the D.C.-based, Children's Environmental Health Network. In 2007, he was among fifteen people appointed by former Gov. Charlie Crist to his Children and Youth Cabinet. In 2010, he was the recipient of the Chiles Advocacy Award for his dedication "to improving the lives of children by successfully promoting policies and programs that benefit those children and families.”