The purpose of this award is to recognize an individual who, like Governor Collins, has gone above and beyond by using their leadership abilities over a lifetime to improve the quality of life for Florida's citizens and its future generations. 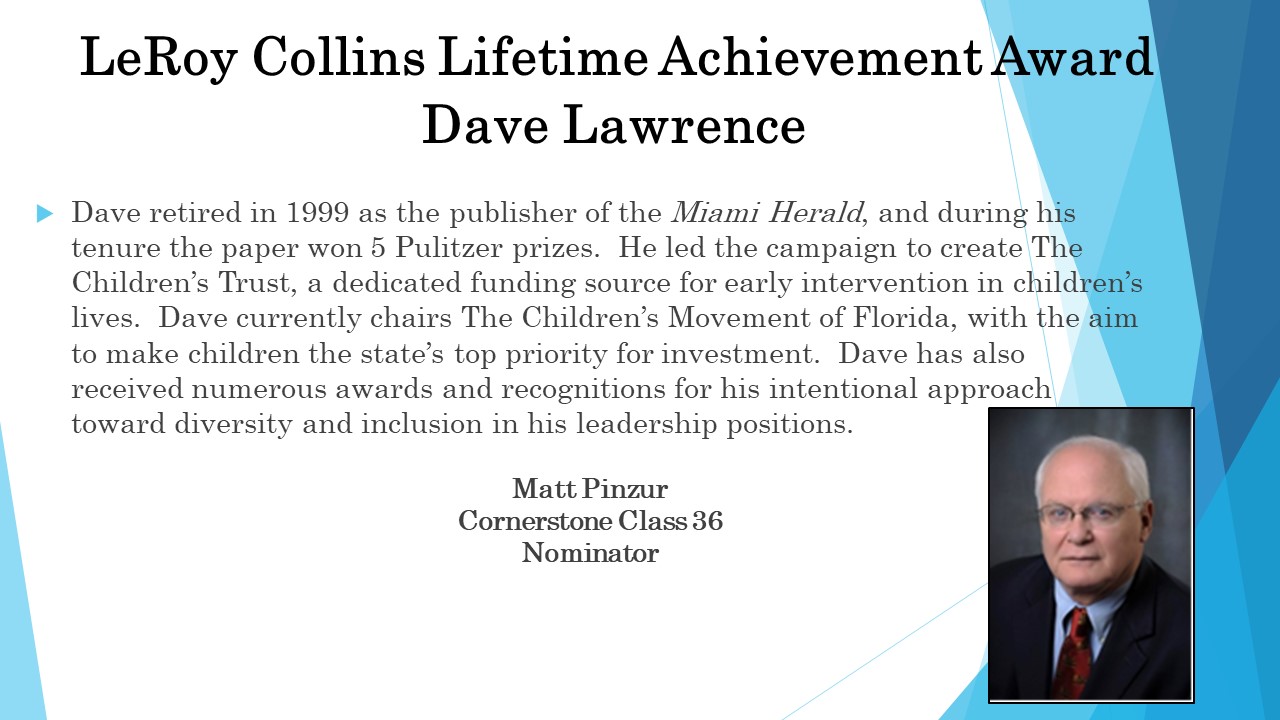 Dave Lawrence has been chosen as the 2020 recipient of Leadership Florida's LeRoy Collins Lifetime Achievement Award.

In recognition of the impeccable standards Governor LeRoy Collins set for leadership in our state, in 1991, the Lifetime Achievement Award was renamed in his honor.  The purpose of this award is to recognize an individual who, like Governor Collins, has gone above and beyond by using their leadership abilities over a lifetime to improve the quality of life for Florida's citizens and its future generations.  The recipient of this award does not have to be a member of Leadership Florida.

Capping a lifetime of service to others, Dave Lawrence, Jr. has stood tall for decades as Florida's most determined, most influential, and most successful champion of high-quality early-childhood learning opportunities and access to child health care - a role he only fully embraced after an equally distinguished career as a newspaper editor and publisher.

Dave led two foundational campaigns that permanently reshaped the ways in which the youngest Floridians develop: the statewide constitutional amendment guaranteeing access to pre-kindergarten for all 4-year-olds, and the Miami-Dade referendum creating The Children's Trust, a dedicated funding source for early intervention in children's lives. He led The Children's Trust to two ballot-box victories, first as a time-limited pilot in 2002 and then as a permanently funded entity in 2008.  In that 2008 campaign, he achieved a sweeping victory, with 85.4 percent of Miami-Dade voters agreeing to tax themselves on behalf of children - during the Great Recession.

Numerous Florida governors have relied upon Dave to lead high-level expert panels whose recommendations helped shape policy and practice for children under the age of five.  He was the founding chairman of the Early Learning Coalition of Miami-Dade and Monroe and now chairs The Children's Movement of Florida, aimed at making children the state's top priority for investment.

His legacy has already been cemented: a K-8 public school was named for him in 2006, and an endowed chair in early childhood studies was established in his name at the University of Florida. Dave established himself as a force in Florida's civic society for 10 years as publisher of The Miami Herald during one of the newspaper's most successful journalistic eras.  His tenure was defined by reporting excellence, including five Pulitzer Prizes, and business innovation, including the spin-off of the Herald's Spanish-language newspaper, El Nuevo Herald, into an independent publication. That decade concluded a lengthy career of newspaper distinction, rising from reporting and editing positions to become editor of the Charlotte Observer and editor/publisher of the Detroit Free Press.

Dave's honors are far too numerous to list, as are his former positions of board service.  He currently serves as a trustee of Florida A&M University, is a life member of the University of Florida Foundation, and sits on national boards of the Everglades Foundation and Americans for Immigrant Justice.

This Award Presentation Proudly Sponsored by: