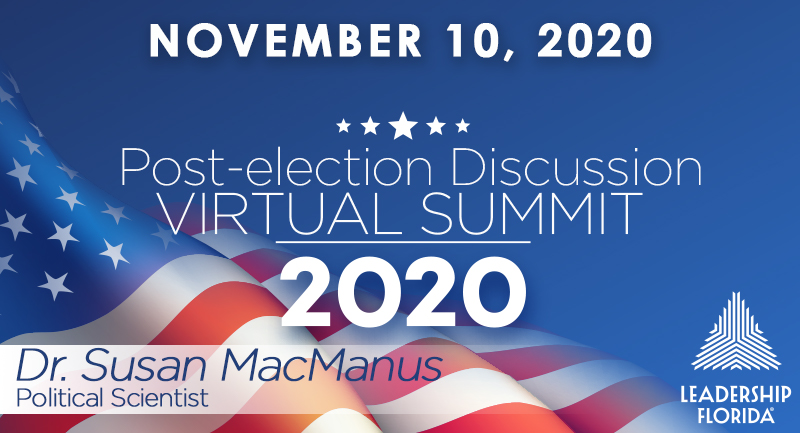 This Virtual Summit is open to all current Leadership Florida Members (no guests, please), and is FREE to attend.

You must be logged in to register for this event.
Dues must be current. 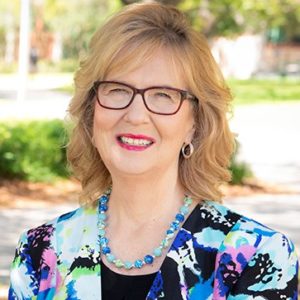 Dr. Susan A. MacManus, who received her M.A. from the University of Michigan and Ph.D. from Florida State University, recently retired from The University of South Florida, where she served as a distinguished university professor in the Department of Government and International Affairs.

Also, since 2008, she has been a featured columnist on sayfiereview.com—a widely-read Florida-based political website. WFLA TV's weekly "Road to the White House" program, on which Susan appeared as a panelist, was nominated for a Suncoast Emmy award in 2008.

She has appeared on every major broadcast and cable television and radio network and has been interviewed by major newspapers in Florida, the U.S., and abroad. She is Florida's most-quoted political scientist. Susan is the co-author of Politics in States and Communities, 13th ed., with Thomas R. Dye (Prentice Hall 2009), Florida's Politics, 2nd ed., with Thomas R. Dye and Aubrey Jewett (Florida Institute of Government, 2007) and Florida's Politics: Ten Media Markets, One Powerful State with Kevin Hill and Dario Moreno (Florida Institute of Government, 2004). She is also the author of Young v. Old: Generational Combat in the 21st Century? (Westview, 1996) and Targeting Senior Voters (Rowman & Littlefield, 2004). Susan and her mother, Elizabeth, are the authors of two local Florida history books published by the University of Tampa Press: "Citrus, Sawmills, Critters & Crackers" (1998) and "Going, Going, Almost Gone: Lutz-Land O' Lakes Pioneers Share Their Precious Memories." Susan is from a citrus-growing family in Pasco County.