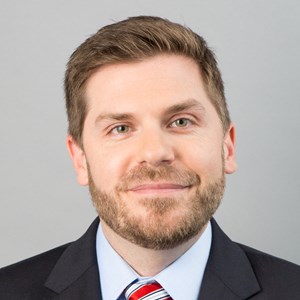 Cornerstone
Home Region
Gulfstream
Class
Cornerstone Class 40
Special Designation
Lifetime Member
Biography
A first-generation Floridian, John grew up in the Fort Lauderdale area before attending the University of Miami. While completing his MBA at Florida Atlantic, John began his career in recruiting before later accepting a position with the U.S. Department of State and moving to D.C. He then led recruiting and HR teams for five years supporting the U.S. efforts in Iraq, Afghanistan, and Pakistan. This included a one-year assignment at the U.S. Embassy in Baghdad.

John returned to South Florida to work in local government before moving on to Gehring Group. As director of growth for Gehring Group, a division of Risk Strategies, John plays a pivotal role in the team's development of people, expansion, revenue, and market development initiatives, and adding additional value to clients, team, and communities.

John lives in Hobe Sound with his wife and two children. He remains a fan and supporter of the University of Miami athletics and works in the community and with non-profits.
×