Godwin is a proud graduate of Florida A&M University, where she earned her Bachelor of Science degree in broadcast journalism. FAMU was the first historically Black university to have an accredited journalism program. She is currently the chair of the board of visitors at her alma mater’s journalism school.

Over her career, Godwin has been honored with six National News and Documentary Emmy Awards, two Edward R. Murrow Awards, an Alfred I. DuPont-Columbia award, and a Sigma Delta Chi Award. She is also a well-regarded member of the National Association of Black Journalists.

David Brooks is a Canadian-born American journalist, social analyst and leading political commentator. He is a profound observer of the American way of life and a knowledgeable analyst.  He is best known for writing an op-ed column for ‘The New York Times’ and for being a political analyst for ‘The News Hour with Jim Lehrer,’ a television news program.

Mary O'Hara-Devereaux, Ph.D., is one of the world's leading futurists and business forecasters, a sought-after keynote speaker, and the author of such best-selling books as Navigating the Badlands: Thriving in the Decade of Radical Transformation. She has established a global reputation as a steady-eyed forecaster and strategy partner whose legendary trend-spotting and analysis have helped thousands of senior executives around the world scan, scout, and steer their way to targets no one else can see.

Mary is a trusted and respected advisor to Chief Executives (CE) and has more than 25 years of global experience providing private companies, government entities, and non-proﬁts with long-term socio-economic forecasts, trend analysis, strategy, and innovation support to support them making better decisions and make sense out of the future.

Lori Borgman is a newspaper columnist, author and speaker.  Her newspaper column touches on a wide array of topics, plus she is the author of seven books, including humor books like “I Was a Better Mother Before I Had Kids,” “All Stressed Up and No Place to Go,” “My Memory is Shot; All I Retain Now is Water” and her humorous holiday novel “Catching Christmas.” She has also written a gentle book on passing the faith to the next generation titled, “Pass the Faith, Please.” Lori may be best known for her small but cheeky book, “The Death of Common Sense and Those Who Knew Him” based on her obituary for Common Sense.  Her latest book, “What Happens at Grandma’s Stays at Grandma’s” was released March 2021

She is a frequent speaker at a variety of events, including the Spouses of Congress event at the U.S. Capitol.

She also is the author of the popular essay, “The Death of Common Sense” which has gone viral, having been published in the U.S., Canada, Great Britain, Australia, Ireland, Finland, Iceland, Portugal, Spain, the Philippines and Greece.  Her latest hit book just published is “What Happens at Grandma’s Stays at Grandma’s.”

Dale Jones is one of the world’s top CEO and board leadership consultants. In 2020 Jones was awarded the Association of Executive Search and Leadership Consultants’ Award of Excellence. He focuses exclusively on finding and attracting CEO and board-level talent for clients seeking authentic leadership—and capacity to lead. A native of Dallas, he grew up as the son of a shoe cobbler/janitor and a teacher, which has fueled his lifelong commitment to service and passion to help others fully realize their potential. Peers share, "Dale is one of the search industry’s leading and loudest voices advocating for the corporate social responsibility imperative. Dale believes in the power of shared values, and the critical mission of being an organization that carries purpose beyond profits."

Dale began his career in banking. He later entered the field of executive search and leadership consulting, joining Heidrick & Struggles as managing partner of the Atlanta office (1999-2007). In 2007, he worked for Revolution LLC, a venture-backed firm that funded efforts to provide clean drinking water to Africa. In 2009, Dale returned to Heidrick & Struggles where he helped lead the firm’s CEO and board practice in North America. He became CEO of Diversified Search in 2013.  Jones is a corporate board member of Northwestern Mutual Corp. and serves in not-for-profit roles at Morehouse College and The Special Olympics. He’s frequently quoted in the media and contributes regularly as a speaker and instructor at Georgetown University. 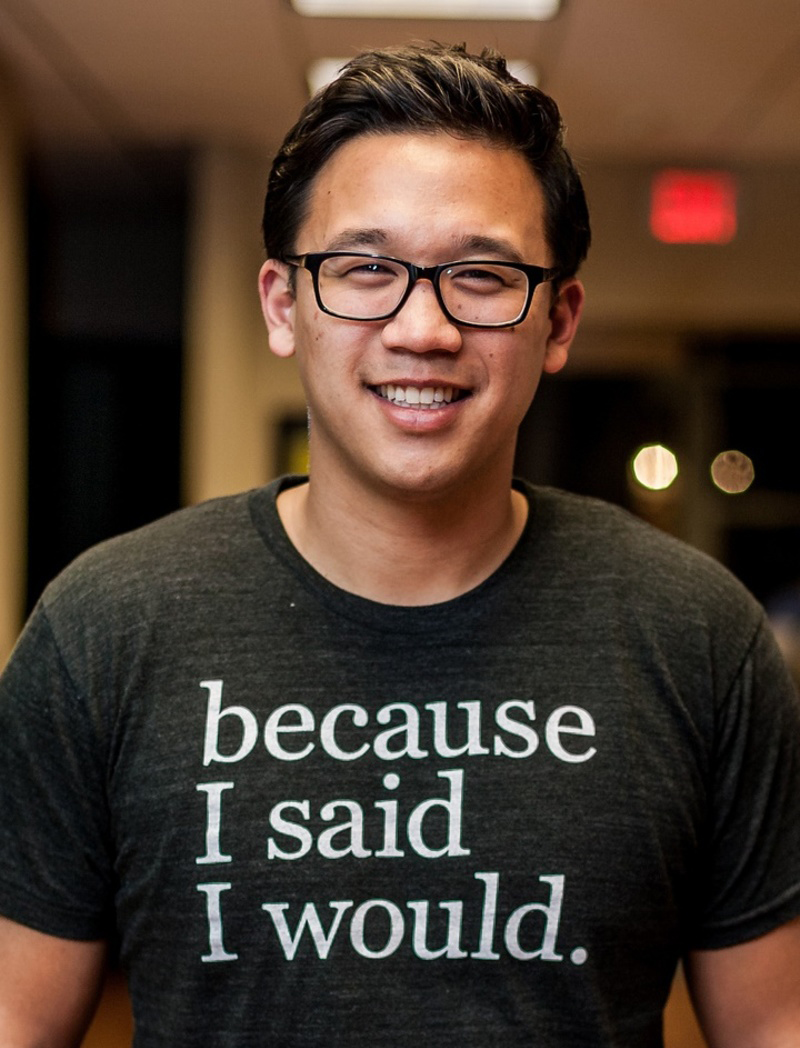 Alex Sheen is the Founder of because I said I would, a social movement and nonprofit dedicated to bettering humanity through promises made and kept. Sparked by the loss of his father, Alex and his organization send “promise cards” to anyone anywhere in the world at no cost. Alex is someone who truly honors commitment. He once walked over 240 miles across the entire state of Ohio in 10 days to fulfill a promise. In just two years, because I said I would has sent over 9.81 million promise cards to over 153 different countries. The promises written on these cards have made headlines around the world. His charitable projects and awareness campaigns have been featured on ABC World News with Diane Sawyer, CNN, The Today Show, NPR, The Los Angeles Times and many other programs.

Dr. Vivek H. Murthy was confirmed by the U.S. Senate in March 2021 to serve as the 21st Surgeon General of the United States as a returning role. As the Nation’s Doctor, the Surgeon General’s mission is to restore trust by relying on the best scientific information available, providing clear, consistent guidance and resources for the public, and ensuring that we reach our most vulnerable communities As the Vice-Admiral of the U.S. Public Health Service Commissioned Corps, Dr. Murthy commands a uniformed service of 6,000 dedicated public health officers, serving the most underserved and vulnerable populations domestically and abroad.

Allison DeFoor II (Cornerstone Class 5)
Canon to the Ordinary, The Episcopal Diocese of Florida
Odet Philippe: Peninsular Pioneer (1997) - about the first non-native settler in Pinellas County, and early settler in Key West and New River (now Ft. Lauderdale).  Florida Civil Procedure Forms with Practice Commentary (1989) and A Guide to the Natural Resources of the Florida Keys.

joyce gillie gossom (Cornerstone Class 31)
Princess (President), BestGurl
Why Are They Following Me? (2017) - is filled with helpful and practical advice about earning respect, motivating followers and achieving goals. joyce illustrates her hard-won knowledge about leadership traits and tactics with anecdotes that make her lessons come to life. Anyone wanting to make a positive difference in a business, institution or organization can benefit from the sensible, practical and easy-to-follow advice she has packed into her guide to building effective leadership skills.

Amy Mangan (Cornerstone Class 37)
Director, Stakeholder Engagement, Duke Energy
This Side Up (2018) - The Road to a Renovated Life is a home and garden editor’s story of a life constantly under construction, none by design. Written with candor, humor and grace, Amy Mangan shares her own home tour, but this one deftly sheds light on job loss, financial shame, home displacement, marital discord, illness and caregiving. Faced with one crisis after the next, Amy discovers how to cope, hope and rebuild, finding a new way home to a stronger way of life.

Accent Pieces (2021) - A personal homage to creating the life you want right where you are. Amy's collection of essays makes sense of life, home, love, heartache and friendships, all while sharing a decorating tip or two.

Kimberly Menchion (Cornerstone Class 39)
General Counsel, Florida Education Association
Make the Pitch…Get the Results (2017) -  A high-impact fast read book designed to help women entrepreneurs who are serious about success to harness the power of persuasion to grow their business through pitching their ideas, products, and services. Make the Pitch is a must-read for women determined to accomplish their dreams. Find out how to win contracts, gain strategic business partners, and obtain financial support and spotlight opportunities to grow your business and propel your big idea.

Ely Rosario (Cornerstone Class 39)
Business Manager, Jackson Properties & Financial Services
Own Your Fire (2021) - Ely Rosario takes us through the lessons of her childhood, from the highs of motherhood, graduate school, and a successful career to the harrowing lows of a ten-year marriage to an alcoholic. With determination, grit, and self-motivation, Ely has overcome unimaginable difficulties to become a noted speaker, a marathon and Ironman finisher, a respected businesswoman in her community, and most importantly, the mother of three amazing children.  Sharing directly from her own life, Ely inspires those facing their own personal challenges.  Ely uses encouraging humor and straight talk to guide others in how to develop the skills and positive habits to set boundaries, create coping skills, and break free of unhealthy patterns. If this speaks to you, know that you are not alone. You may have heard these words before, but now you’re finally ready to take the first step. Make the decision to have a better, healthier life—get ready to Own Your Fire.

Ron Sachs (Cornerstone Class 10)
Founder & CEO, Sachs Media
The Secrets in The Clouds (2020) - Sunny Albright always sees happy pictures of animals, flowers, and faces in puffy clouds. But she loses her joyful outlook when the COVID-19 pandemic changes her life. Some amazing new friends help her return to her positive self. This uplifting family story is about coping with loss and grief, mixing in fantasy and some simple science to reveal The Secret In The Clouds.

FOR QUESTIONS OR ASSISTANCE, VISIT THE FAQ PAGE